Conceived and choreographed by Antony Hamilton, one of Australia’s most daring and celebrated choreographers and Chunky Move’s current Artistic Director, Yung Lung sports a bass-heavy, rave-inspired soundtrack crafted by the multi-faceted musician and composer Chiara Kickdrum. Sydney Festival quizzed both of these talented creators, in order to understand a little more about this boldly immersive new dance work.

What was the catalyst for creating this work; the very first conceptual sparks that led to Yung Lung?

Yung Lung came from a sense of foreboding I felt about media and communications overload in the midst of the Information Age. I was also interested in the notion that the rise of technology post 2000 has been a wild and freakish event, like a runaway train, that has quickly become a situation we find ourselves in, rather than a situation we’ve guided with any sense of forethought about the consequences.

I’ve also reflected on Generation Z and Millenials, who were born after the singular event of the internet coming into being, and having no experience of an era before it. Yung Lung is an affirmation that this is their time and there no turning back.

The sensory intensity of Yung Lung is similar to a rave atmosphere – what is it about this kind of experience that inspires you to choreograph?

Dancing is a very old ritual, and a biological instinct. The euphoria of party trance states vibrating against the discipline of formal choreography is a tension I’m interested in with this work. The party sensibility of the work is more of a device to contrast against ideas about the weight of history and information. Trance dancing for survival. The party represents, for better or worse, an ability and perhaps willfulness to switch off from the noise and horrors of the world around us and inside ourselves, and just be distracted by fun. So it’s kind of dark in acknowledging the ease with which we forget about our own existential crisis.

Why have the audience stand? How do you think it’s going to affect the way they appreciate this work?

Yung Lung is a very multi-faceted experience, so it’s worth moving around and seeing things from different perspectives. Standing and wandering around of course also offers audiences the opportunity to feel the beat, and let it take them over in the atmosphere of the work. But remember Sydney Siders: no dancing allowed, unless we can convince you to pray in the church of the techno gods.
Can you explain this phrase from your program further...
Yung Lungs rise. Yung Lungs energise. Yung Lungs dance on the graves of visionaries past, to eat all history to the end of time.

The program note is more like a poem, so explaining it is a bit tricky. But it's a bit of a call to arms I guess, for young people to carry the torch for humanity, and perhaps take us forward on a truly radical path by abandoning the tired political and social ideologies of the 20th century once and for all.

What have you loved most about creating Yung Lung?

Working with the dancers and the amazing collaborators has been so much fun. They are all so talented and driven, and we’ve had a blast making something really crazy, but something I hope is also aspirational in its own unusual way.

Where did you find inspiration for this vibrant and ferocious soundtrack?

After my first conversation about music with choreographer Antony Hamilton, one of the things that came up was the early rave scene and electronic music in its rawest analogue form. I wanted to incorporate the club/dance aesthetic with a more experimental approach, which is what I am mostly interested in. I wanted to see how far I could push it and I was lucky enough that Antony let me do it! Artists like Autechre, Conrad Schnitzler, Suzanne Ciani and Black Merlin were some of the artists that influenced my sound.

What kind of feelings and emotions are you trying to draw out of the listener?

While composing the music for Yung Lung, I wasn't thinking about the audience, strangely, but rather about the dancers. I was trying to imagine their movements and what emotions they could project on the audience while dancing to my sound. I wanted the sound to have a strong party vibe, but with an uneasy feeling all through out. Like a dystopian, distorted, really strange futuristic dance party.

What tools did you use to create this music?

I used a few different pieces of hardware and software. As for hardware, I used the Elektron Analog Rytm, the Access Virus TI2 Desktop and the Elektron Digitone. Software - Arturia Synthi V, some of the Soundtoys FX plugins and other crazy effects – too long a list!

What do you love most about Yung Lung?

I love the power of it, the energy. I love how weird it gets but it's so hypnotic and fun even being quite dark and intense. It was an honour working with Antony and Callum Morton's sculpture and Kris Moyes visuals just take things to the next level. Dream collaboration!

Yung Lung is on now at Carriageworks, until Sunday 23rd January. 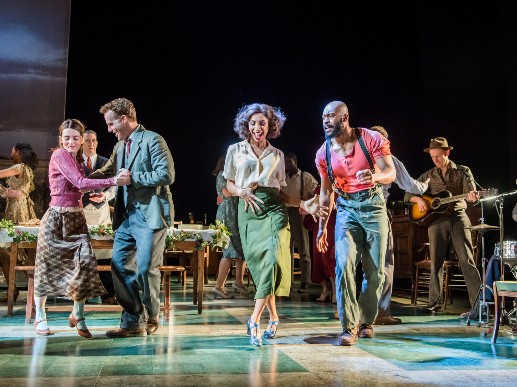