The Making of Holding Achilles

Holding Achilles brings together physical theatre maestros Legs On The Wall and visual geniuses Dead Puppet Society – to tell an ancient story with a queer heroes at its heart.

Holding Achilles brings together two mainstays of the Australian stage – physical theatre maestros Legs On The Wall and visual geniuses Dead Puppet Society – to tell an ancient story of The Iliad with a queer heroes at its heart.

Here, the team involved in bringing it to the stage explains what’s gone into building the world, and what they hope you’ll take out of it.

“We’re taking this ancient story and flipping it on its head,” says, director David Morton, of Dead Puppet Society. “We wanted to tell a story with queer heroes at the centre of an otherwise very well-known story.

“[However], the fact that the heroes of the story are queer is refreshingly beside the point. The story of their love serves as a backdrop for the choices they make when thrust into a broader conflict. There is no room in this play for self-loathing or homophobia…their relationship is normalised, and their struggle [is] not about identity, but how to be a good human.”

The script is only a framework

For all Dead Puppet Society work, but Holding Achilles especially, David Morton says, the script acts not as “the gospel” but as a document to inform the play’s development, “capturing key images in the staging, narrative cues to be built into the physical sequences, as well as the dialogue to guide the performers in building their characters.”

When they discover a new way to perform something in rehearsal, they adjust the script accordingly.

“Our collaboration with Legs On the Wall means we're giving humans the same superpowers we normally need to use puppets for,” Morton says. “When we thought of flying performers and using a rig to enable bodies to do what bodies normally couldn't do, we immediately thought of Legs On The Wall. There’s no other company in the country that gives humans superhuman abilities quite like Legs On The Wall does.”

“We have often thought that the aerialist has so many similarities to puppets on a string, getting manipulated by an experienced counterweight on the other side of the line,” adds Legs’ Artistic Director Joshua Thompson.

“The genesis of our collaboration with Dead Puppet Society is a symbiotic understanding of the manipulation of objects and what greater object than the body to tell powerful stories?”

The design for Achilles’ shield was sourced from early translations of The Iliad, digitally traced and etched onto the material, which was then hand detailed and vacuformed with plastic to make it waterproof for one particular scene.

You won’t be able to miss the “tippy spear”, the four-metre-long replica of Achilles’ spear rigged to the ceiling and used to facilitate many of Achilles’ and Patroclus’s aerial tricks. And “The Knife” may look deadly and metallic, but it’s made of EVA foam and soft as sponge.

Savannah Mojidi, head of fabrication, says Heracles the bear, which grows from a cub to an adult bear in the play, is a rod puppet operated by five performers with a head assembled from 44 pieces of rubber coated foam and plywood. 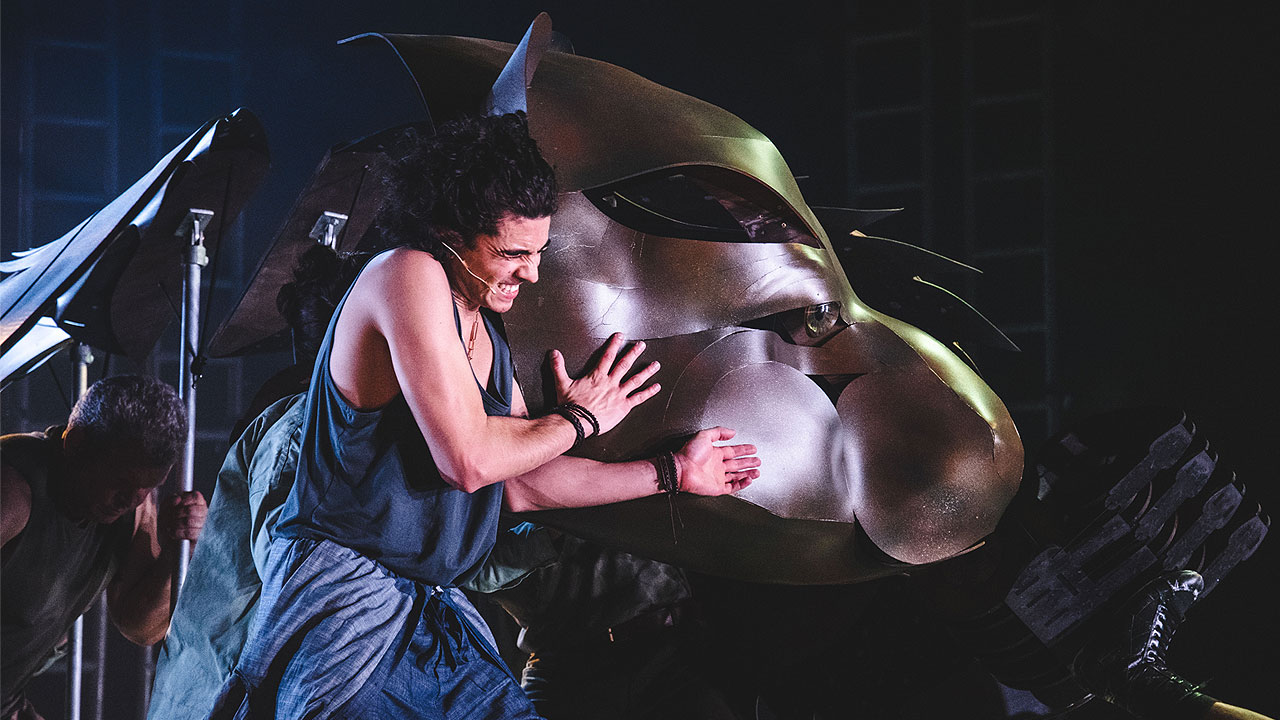 The fire is constructed of 36 individual acrylic laser cut LED flames, and the armada of enemy ships is made up of 77 individual 30cm tall ships.

For Chiron the Centaur, who trains Achilles and Patroclus as young men, performer Nic Prior wears digitigrade stilts as another performer plays the body.

“What's unique about our music process is that we compose an album for the production, then build the production around it,” David Morton says.


“It’s a thrill to see the music choreographed and people flying through the air where we’ve put a sweeping string melody,” composer Tony Buchen adds,” and then you actually see a person sweeping through the sky. This is dance, but it’s acrobatics.”

"There have been many adaptations of the story of Achilles,” Morton says, “in Holding Achilles, we examine what is rarely explored – the human cost of this sort of conflict. In our adaptation, we flip the notion of what's heroic on its head. In this version, the hero is a pacifist queer man. Don't come expecting a traditional retelling of The Iliad, otherwise you'll be severely disappointed.”

“For Dead Puppets, Holding Achilles is definitely the biggest thing we’ve made to date. Audiences are going to be treated to a stunner of a story, incredible staging, and 32 original pieces of music that flow together in this blissful arc featuring Montaigne singing these exquisite vocals,” Morton enthuses.

“It’s the sort of work where I keep pinching myself that we’re lucky enough to build a world that is this full of imagination and beauty.”

Welcome to an exhilarating summer of art. We look forward to welcoming you in January 2023.